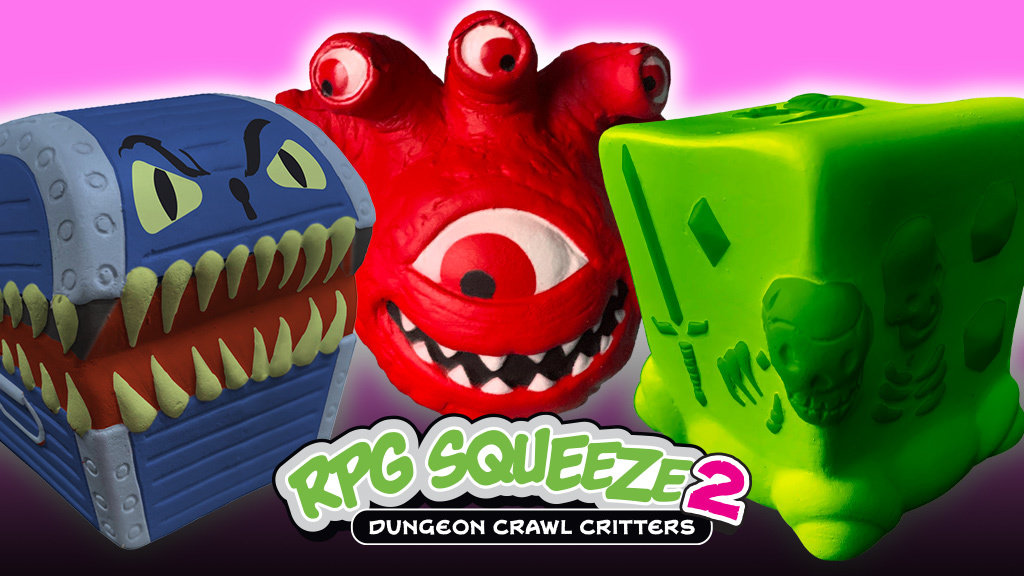 Classic dungeon crawl monsters in the form of Slow Rise Squishies featuring the Gelatinous Cube, Mimic, and return of Eyegor

Latest Updates from Our Project:

Today I have disappointing news. I was under the impression that the squeezes had left Savannah and were on their way to Atlanta. Instead, they were going to ship directly to Savannah to me.

There was some sort of mix-up yesterday and the truck couldn't get my 8 pallets of stuff, and then today when they tried, US Customs decided at the last minute that they want to inspect the shipment.

So what does this all mean?

First off, I will not be able to pack any orders this weekend. I will however continue building boxes in preparation for when the shipment does arrive.

This morning I went to the warehouse early and started the process of building boxes. I only managed to get 150 made before receiving the news... and decided to come home to get this update out to you.

Hopefully, US Customs will go look at the shipment today and release it. But I won't know until they let me know.

I will keep you updated as word comes my way.

Today I got word that the shipment will be arriving in Savannah tomorrow! Usually, it takes a day or two to then make it to Atlanta, and then another day to make it to my warehouse. I am very hopeful that they will arrive to me by the end of the week so I can get a ton of shipments packed up this weekend. I AM SO EXCITED!!!!

Thank you so much for being a part of the RPG Squeeze quest! The reports coming in from folks overseas who have received them are really positive! I think everyone is going to love them.

Now that we are getting really close to sending out all of the squeezes to you, I want to share an early look into my next adventure. I'm thrilled to be launching a dice line called Polyhedral Potions. In preparation for that campaign, I am giving away some of the early dice prototypes, including a rare set of raw unpainted dice. You can check out the image below and enter to win them here. And don't forget to click the notify me on launch button on the Kickstarter holding page. My goal is to launch this at the end of the month as long as the majority of the squeezes are in the mail to all of you.

Folks outside of the US are starting to have their squishies arrive!!! There have been a few comments mentioning people getting their packages, which is wonderful news.  If you haven't received yours yet, you should soon (unless you had one of the Mimic boxes on your pledge, see the last update).

Here in the US, the boat arrived and is at the freight station and is supposed to be devanned this weekend. That basically means the big shipping container that all the RPG Squeezes (and a bunch of other people's stuff) are in will be getting pulled out of the container.

The next steps will be:

Get on a Truck to Savannah, GA

Go from Savannah to a local freight company in Atlanta

Get shipped to my warehouse


Sometimes this moves quickly (like a week) and sometimes there are things that slow it down (like customs). I'm hoping it will be fast, but either way, I will keep you posted.


I know it has been a little while since my last update. I apologize, there was nothing new to report. The shipment with items heading to be for US & Canada fulfillment is still on the water and is scheduled to dock in New York at the end of the month. As I have more info, I will update you on that. For all other countries, I just spoke with my fulfillment partner in Ireland.

They received the shipment from my manufacturer at the beginning of February but have just now been able to dig into it. They have been extremely busy due to different lockdowns and more people needing their services (they are considered a necessary business). This morning we reviewed everything that was sent to them and most of it looks good, but as this is a Kickstarter there had to be a bit of a hiccup.

There was a communication error between myself and the manufacturer. They were supposed to send 1 case of the Brown Mimic Series 1 filled boxes and 2 cases of the Grey Mimic Series 2 filled cases to Ireland. Instead, they sent 1 brown mimic and 2 grey mimics. This leaves about 20 backers who are going to be getting their orders later than everyone else. I am very sorry for this.

Because they do not have the product, I have to wait for it to arrive here in the states and then send it on to Ireland. It will be a high priority for me to ship those out to Ireland as soon as they come in. All other international orders should ship out late this week or early next week. As they give me tracking info I will update it in Backerkit.

That is about all I have for now. It may be about 2 weeks until the next update. Fingers crossed the shipment will arrive in New York with all the squishy goodness for that update.

We are getting so much closer! Thanks for being a part of this project!